Power Together: A message from champions of gender equality 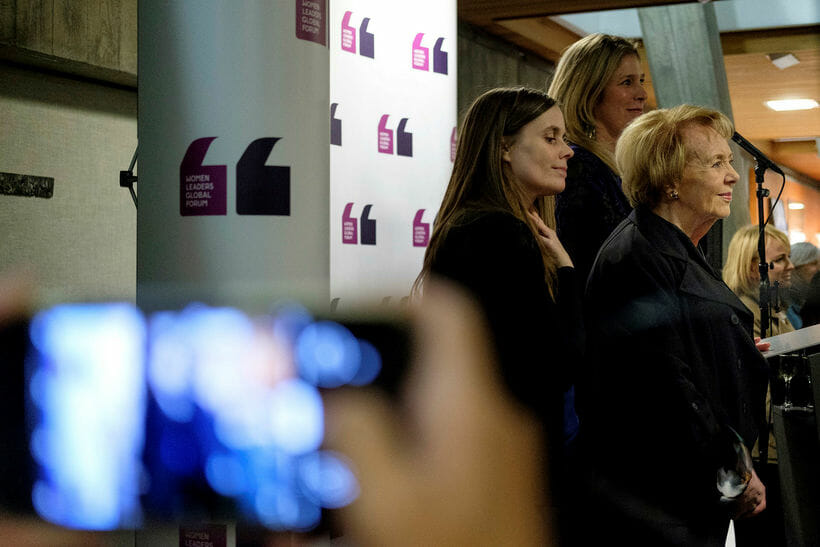 The theme of the Reykjavík Global Forum 2019, Power Together, remains a relevant message during the COVID-19 pandemic: now is the time to power together to advance UN Sustainable Development Goal 5 on Gender Equality. Women political leaders have demonstrated the most effective approaches to combating this pandemic. For the 2020 Forum, it is more important than ever before to amplify these women leaders’ voices and solutions.

“An equal and sustainable future”

Vigdís Finnbogadóttir shocked the world when she became President of Iceland in 1980. Not only was she the first female president in Icelandic history, but she also was the first democratically elected female president in the world. In her opening remarks, Katrín Jakobsdóttir, Prime Minister of Iceland, credited Vigdís with successfully progressing Iceland’s movement towards gender equality and being an encouraging role model to the daughters of Iceland, promoting female political participation.

Four decades later, Steingrímur J. Sigfússon, Speaker of Alþingi, Parliament of Iceland, joined Prime Minister Jakobsdóttirin reflecting on Vigdís’ legacy, in Iceland and throughout the world. He noted the important role Vigdís had in advancing the discussion of gender equality abroad by developing it as a signature policy in Iceland. Gender equality is fundamental to extending the wellbeing of societies and national prosperities. Achieving gender equality is the responsibility of all genders and nations. Even in the most difficult of times, it is important to continue pursuing gender equality and, when achieved, ensure its sustainability. The strengths of women political leaders, demonstrated in their responses to COVID-19, have been widely promoted. This has created great momentum leading to RGF 2020, posing as an invaluable platform to discuss the continuance of advancing gender equality through and beyond this pandemic.

Power Together represents strategic partnerships both amongst nations and genders. In her remarks, WPL Founder and President, Silvana Koch-Mehrin, urged women leaders to embrace the platform of collaboration established through RGF, engaging with leaders of different expertise. She called on women leaders to imagine how different their “influence would be put together.” There is great motivation and success in achieving goals set forth when women leaders share their visions and powers with one another.

As the world moves forward together in these unprecedented times, how can women leaders power together to continue to advance gender equality through recovery efforts? The answer to this question may address womens’ roles in economic systems, womens’ access to health care, or gender-based violence policies. RGF 2020 is a valuable framework for women political leaders to work jointly with one another, seeking solutions to this question and many more, realizing the vision of power together.