Structures and stereotypes: the biggest challenges ahead 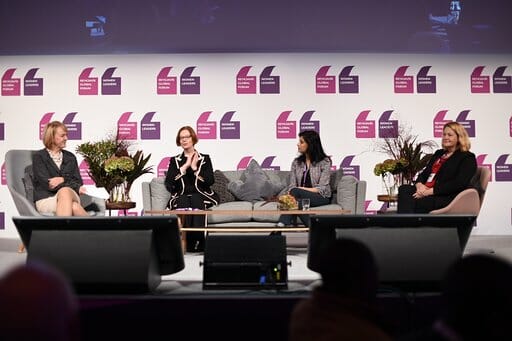 Structures and stereotypes are the biggest challenges leaders face today, recited Julia Gillard when speaking at the “Setting the Scene” session during the Reykjavik Global Forum – Women Leaders on 19th November 2019.

In this framing session, Julia Gillard, Prime Minister of Australia (2010-2013), Member of CWWL, addresses key challenges of the third decade of the 21st century and the contribution of women’s leadership together with Gita Gopinath, Chief Economist, International Monetary Fund (IMF), and Jacqueline Hunt, Member of the Board of Management of Allianz SE. Hanna Birna Kristjánsdóttir, Senior Advisor, UN Women; Chair of the Board, WPL, acted as moderator.

These challenges apply to all leaders, but especially to women leaders. On structures, Gillard points out that current structures do not create equal career paths and equal opportunities for women-leadership in all sectors, hence the need to re-engineer the structures to become more inclusive. Jacqueline Hunt notes that when women commit to changing the world, they create opportunities to position themselves as part of these structures as well as part of the response to the changes sought. This way, women are part of the process instead of watching from afar.

On stereotypes, Gillard says that there are still very strong stereotypes when it comes to women in leadership. Gillard references an opinion poll from 1940 regarding intelligence levels between men and women in which a large number of respondents said that they believe men to be more intelligent. While she acknowledges that today public opinion has changed regarding the ability of women to make a contribution to society, leadership stereotypes still persist. They are historically based on male attributes and male styles of leadership. Such stereotypes still hold women back everywhere in the world. Importantly, these stereotypes go beyond women trying to balance work and family life, Gillard talks about how women are often viewed as either good or bad and that they are often perceived as being too sensitive or not sensitive enough rather than each one being viewed as an individual with unique traits. Men in leadership are not scrutinised for the amount of emotion they display whether it be a lot or a little.

Hunt expands on this point by talking about how the world is facing a time of unprecedented change. These changes create opportunities for women to become part of the response. On the other hand, they also create risks. The question is whether leaders are going to allow existing structures to define the response. Ideally, leaders will seize opportunities on the globalisation front such as inclusive capitalism in order to build a more equal world across all dimensions. That part of the story is unwritten, that’s why we are here at #Reykjavik19, Hunt says.

When asked about globalization, Gopinath says that she considers this the major issue of the 21st century. She highlights how the last decades have been marked by a strive towards more integrated economies, the gradual expansion of multilateralism and the free flow of ideas, but cites that in the past two years these trends have reversed. We are facing rising inequalities with a concentration of wealth which must be addressed, she says.

Gopinath singles out two issues to fix in order to look for a better future. Firstly, domestic policies are as important as effective international solutions and cooperation. Effective domestic/local policy is an important piece of each country’s position in global affairs and for providing sufficient safety nets for their citizens. Secondly, international and large Institutions have to adapt to the reality we face today and move towards clear actions rather than just words.

Likewise, Gopinath, Hunt, and Gillard agree that in order to break stereotypes and improve the position of women in leadership, it is important to avoid “putting women into boxes”. It is time to re-shape the stereotypes of women and men to get a shared sense of what kind of leadership is needed today. Hunt explains that people are more diverse in ways that do not have to do with genders such as ethnicity, religion, or sexual orientation. She also says that since the number of women in politics and leadership is small, very few women end up being emblematic of women everywhere when in reality, one or two women can not accurately represent all women. Gopinath also expands on this point by highlighting the importance of numbers and figures, especially when it comes to the propensity of access to education to determine a women’s life and her career paths. Clarifying the importance of equality, Gopinath says that equality is needed for good economic policy and not just good social policy.

In closing, Gillard, Gopinath, and Hunt agree that a step in the right direction in terms of mitigating global challenges of the 21st century and advancing women in leadership is to make people feel continuously uncomfortable, this can be done by gender budgeting for example, or by measuring progress. Gopinath notes that generally, making people feel uncomfortable about a problem encourages a faster and more effective response and hastens the pace of change.

— At the Reykjavik Global Forum – Women Leaders 2019, the session “Setting the Scene” was held to frame the Forum’s conversations in the current global context. It was moderated by Hanna Birna Birna Kristjánsdóttir, Senior Advisor, UN Women; Chair of the Board, WPL and included three women leaders who spoke on the key issues of the third decade of the 21st century. Conversationists were Julia Gillard, Prime Minister of Australia (2010-2013), Member of CWWL, Gita Gopinath, Chief Economist, IMF, and  Jacqueline Hunt, Member of the Board of Management of Allianz SE.