The Struggle for Democracy 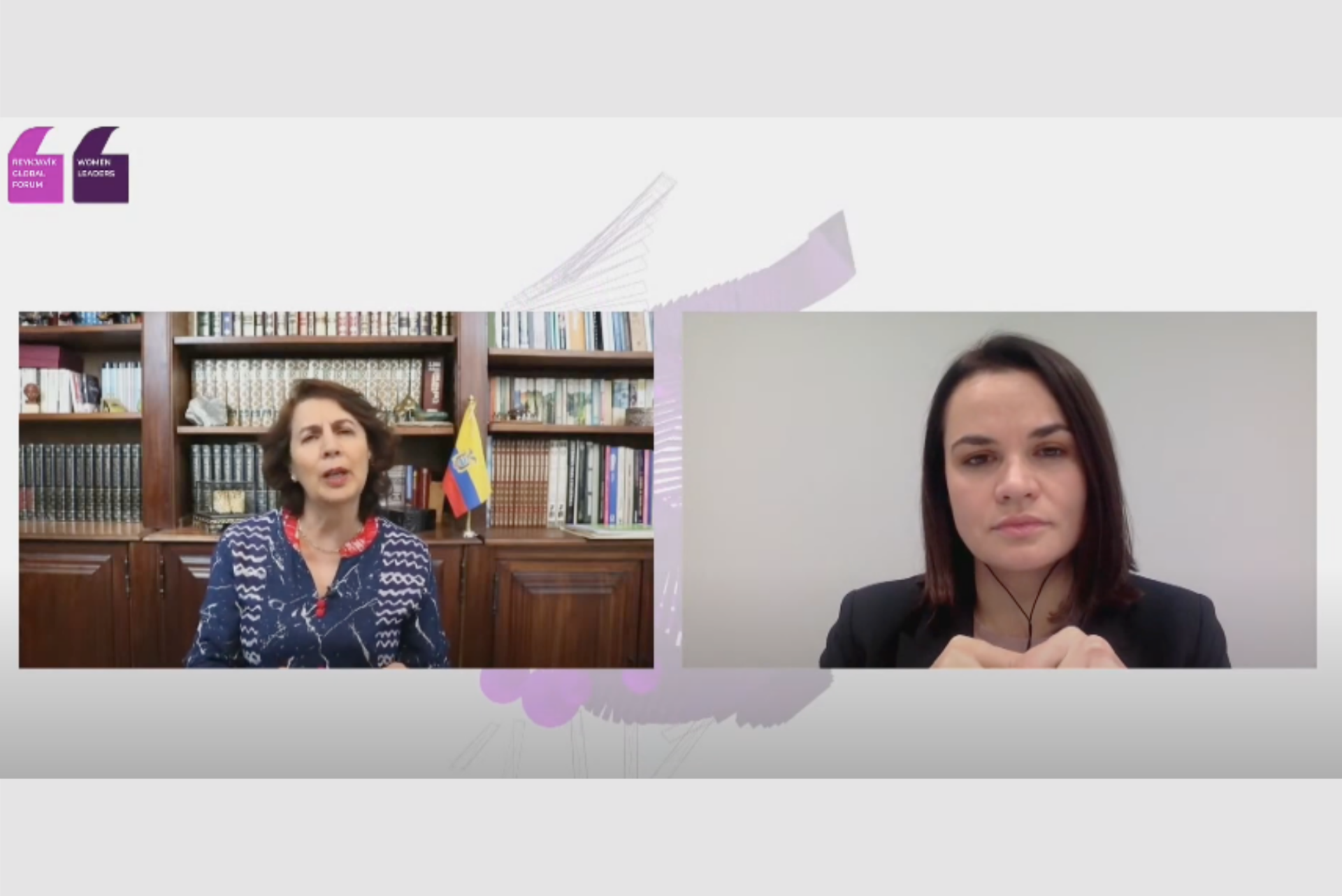 The political upheaval taking place in Belarus underscores the vital role that women must play in fighting for democratic values.

At the Reykjavík Global Forum – Women Leaders 2020, exiled Belarus presidential candidate Sviatlana Tsikhanouskaya (Human Rights Activist and Belarus Democratic Opposition Leader) spoke with Rosalía Arteaga (Member of the WPL Board, Executive President of the FIDAL Foundation, and former President of Ecuador) about her unexpected role as leader of a democratic movement. By mounting daily protests, women have led the charge in Belarus against the entrenched government of President Alexander Lukashenko, who claimed victory in the broadly disputed election of August 2020.

Tsikhanouskaya stood as the Democratic challenger in Belarus after her husband Sergei Tikhanovsky, an anti-government vlogger, was barred from running and jailed along with more than 100 Belarusian opposition politicians.

President Arteaga asked Tsikhanouskaya what it takes to continue pursuing the struggle for democracy, and how she dealt with the distractions of male criticism and attempts to intimidate her into suspending her campaign.

“It’s difficult to be a leader of democratic values (in Belarus), and it’s more difficult when you’re a woman. But sometimes women are put in circumstances where they have no choice. For me, it wasn’t a conscious choice, I was put in a circumstance where I had to step in instead of my husband,” Tsikhanouskaya said.

“As for critics – critics are there to humiliate you. If our government hires people to write ugly stuff about me, it means they are afraid, and you are on the right path.”

President Arteaga recalled being struck by Tsikhanouskaya’s courage when hearing her speak at the  Women Political Leaders (WPL) webinar “Women Rising for Democracy” in September 2020.  She wondered how much courage it takes to continue the fight for democracy, and whether international support was crucial to her success.

“I always thought that I was a weak woman,” Tsikhanouskaya responded. “I couldn’t even imagine that I would be able one day to take for myself so much courage to lead a movement… But sometimes women underrate themselves. So it was my personal courage, and the fact that from the beginning I was surrounded by people who believed in me, and that of course gave me much strength.”

She went on to remark that “in our case, when we are struggling against dictatorship, international support is extremely important for our movement, because if not for their support, we would feel weaker. So inspiration, solidarity, and assurance that all the people around are watching us, are inspired by us, and want to help us is very helpful.”

President Arteaga ended the chat by asking how Tsikhanouskaya envisions the future of her fight for democracy in Belarus. “What I know, and what the Belarusian people know, is that Belarusians have changed forever,” she replied. “We will not be able to come back to that state of slavery, and now people are fighting for their future and that of their children. We want to build a new, democratic Belarus where people are safe and free, and their rights are respected.”

Tsikhanouskaya further noted that “Belarusian people are united now – women, men, students, teachers, doctors, old people, young people – everybody is united. Nobody expects that we will get rid of this system in a couple of days. But our people are ready to stand this way, and we will succeed sooner or later.” Despite violent persecution by the authorities, protests in Belarus continue to this day.